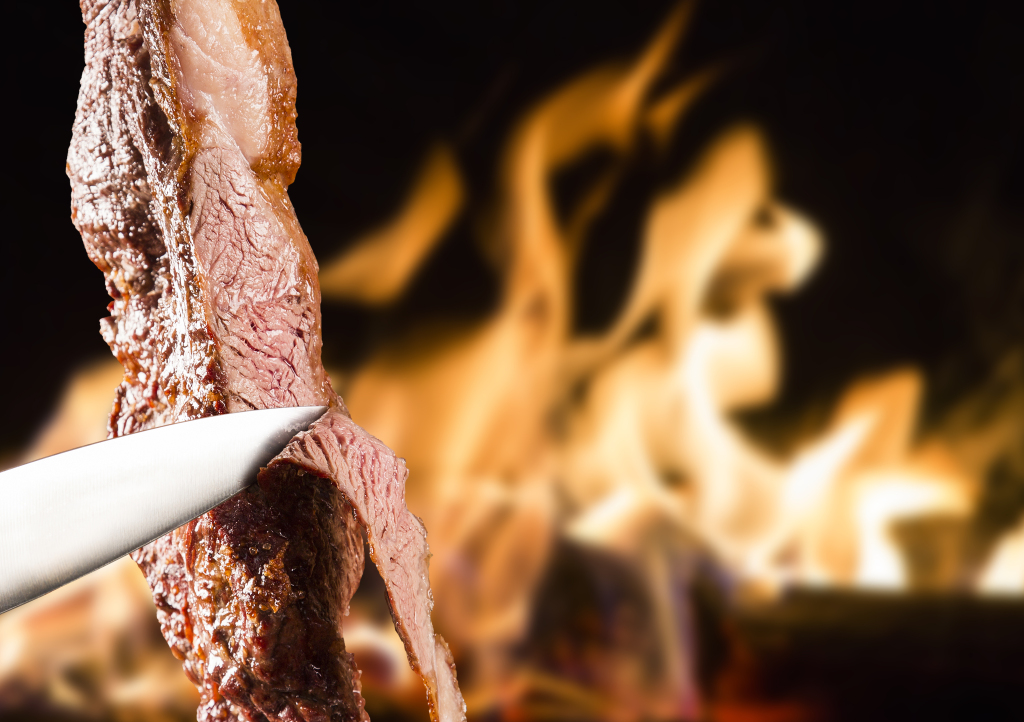 Just thinking of Brazilian churrasco gets my mouth watering. There is nothing like the feeling of walking into an authentic churrascaria on an empty stomach… the smells, the sounds, the energy. If you’ve been to a churrascaria then you know what I’m talking about. And you know that feeling of “it’s about to go down”—hope you wore your stretchy pants.

For those of you who don’t know what churrasco is, let alone a churrascaria, I’m about to blow your mind with some food knowledge. To put it simply, churrasco is skewered barbecue meat. Large pieces of meat are pierced with long metal or wooden stakes and grilled over a churrasqueira, or a specially-built barbecue grill (not to be confused with a churrascaria, which is a Brazilian steakhouse). Meats on the skewers vary, but the norm is steak, pork, sausage, and chicken. There is also, without a doubt, some magic involved in there somewhere because the meat comes out so juicy and grilled to such perfection that it’ll make a believer out of anyone.

The best part about a churrascaria you ask? Well, they’re usually ‘all you can eat meat’ joints. Yes, you read that right. What made churrascarias famous is not only the fact that they serve some of the world’s best meat, but the espeto corrido. Espeto corrido is a serving style in which the waiters walk around the restaurant with large meat skewers and slice off as much meat as you want on your plate, table-side. Over and over again until you tap out. For some extra fun, challenge your tablemates to who can go the longest. You might pay for it later but, I promise, it’s worth it. 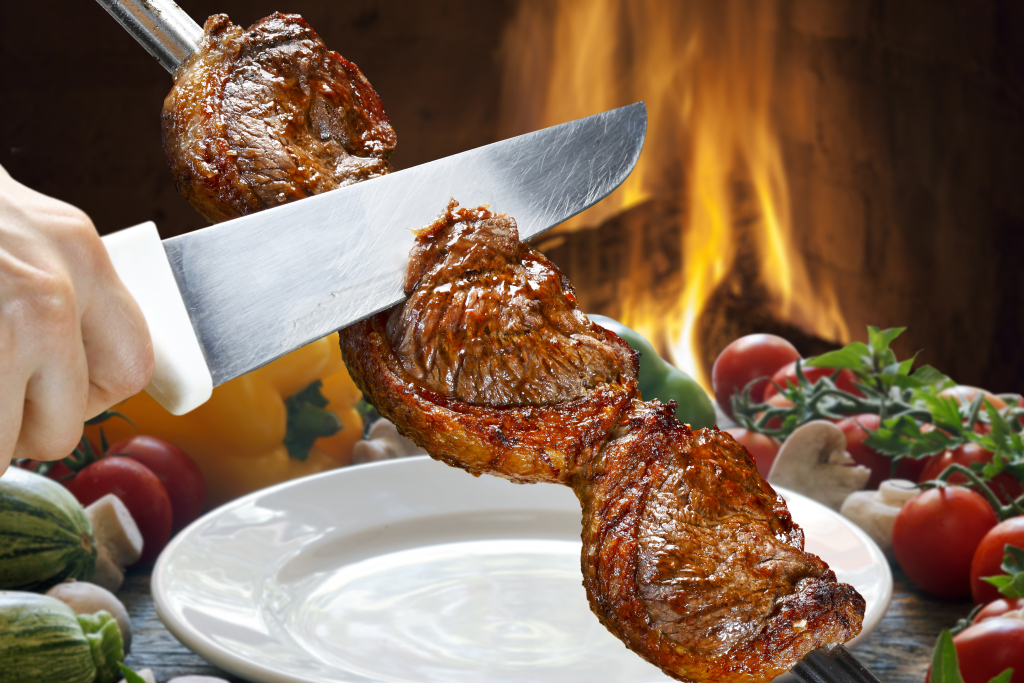 While Brazilians get most of the credit for churrasco, as they should for undoubtedly putting it on the map, churrasco was actually born on the Rio Grande before Brazil was even a thing. No, not the Rio Grande you’re thinking of that separates Texas from Mexico. We’re talking the oldschool Rio Grande (now called Rio Grande do Sul, meaning of the south). And if you know your geography, this would put the birthplace of churrasco right on the border or Brazil, Argentina, and Paraguay.

It turns out this area was happenin’ in the late 1600’s—before borders and countries and all that mess. The semi-nomadic indigenous people that traveled through and lived in communities along the river were known for their killer fire pit parties. My favorite kind. They’d skewer the day’s hunt in pieces on a wooden stake and grill it on the pit for the crowd. In the coming decades, these nomads would lay down their roots and become ranchers—breeding cattle and raising livestock. But their grilling methods remained, and eventually, churrasqueiras were created specifically to accommodate these long meat skewers.

The ranchers of the Rio Grande do Sul, on the Brazilian side of the border, took the churrasco concept to new levels. By the 1800’s, the churrasco style barbecue had spread like wild fire throughout vast regions of Brazil, northern Argentina, Paraguay, and Uruguay. 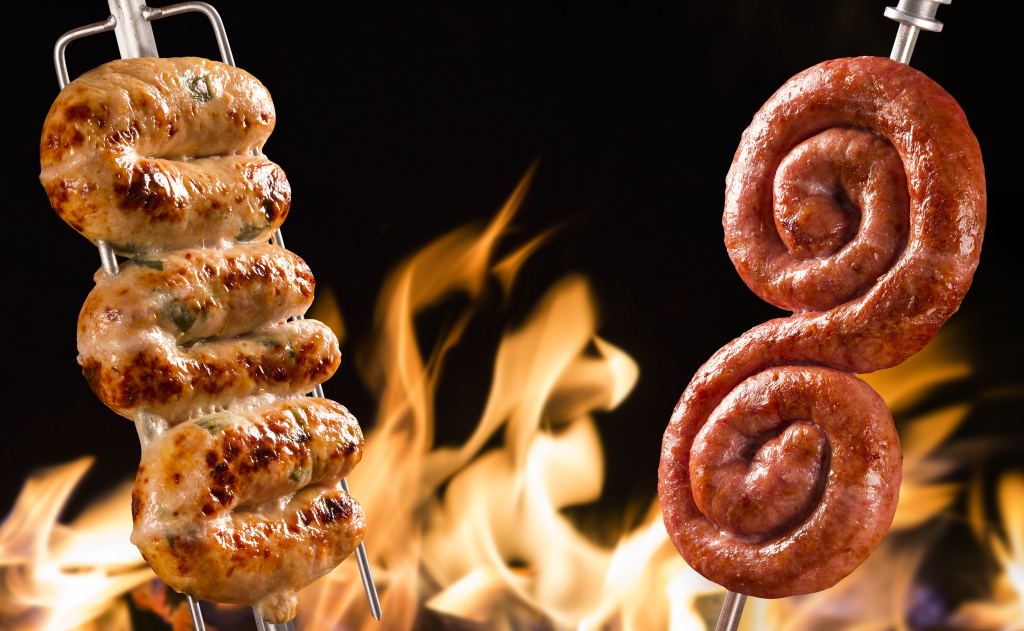 With practice, comes perfection… in most cases. Because even our own president can’t seem to get that hair right no matter how many times he tries. But all Trump jokes aside (stop me now, ‘cause I could go for days), the ranchers of the southern Rio Grande began developing better techniques for grilling and serving these skewers. The Churrasco evolved. What began as a necessity—a method of cooking as much meat as possible before it went bad (oh, life before refrigerators), became a novelty and a traditional cooking technique throughout the region. A technique that once produced flavorful, yet tough meat, developed into a process that slow cooked meat to juicy perfection. 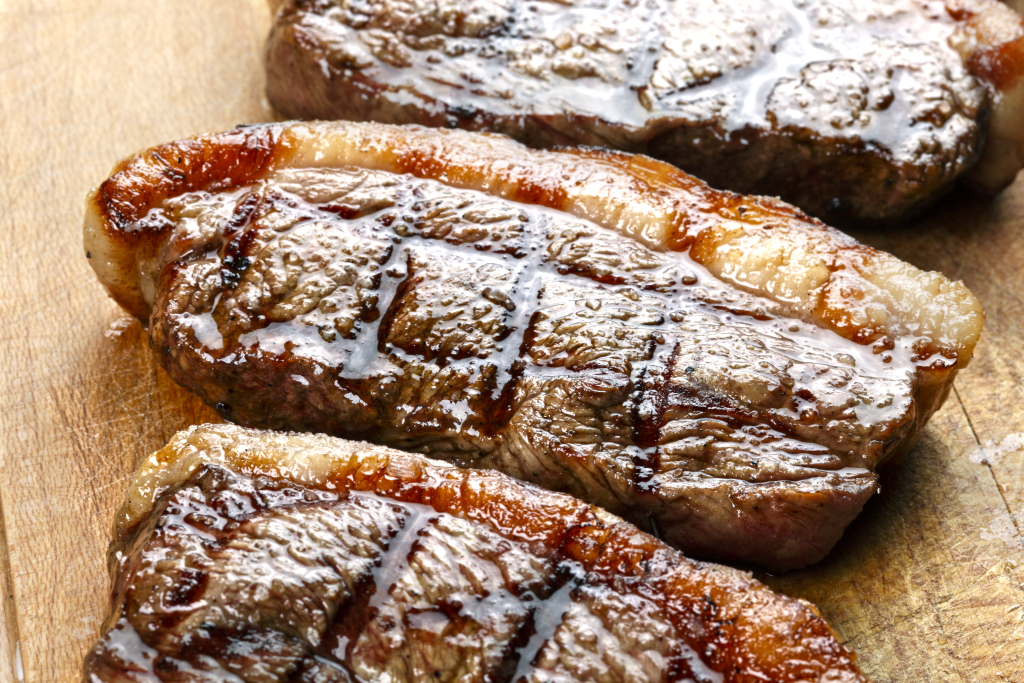 By the end of the 1800’s, it became a tradition for the ranchers to butcher their livestock, build fires, and invite the families of the village over for a meat-eating shindig. You gotta love the sound of that. They designed knives that they hung on their belts to slice the succulent meat thinly right off the skewer onto a plate. It was a ritual, of sorts— an event that would become the inspiration behind the espeto corrido practiced in most churrascarias. If this doesn’t make you want to visit a churrascaria then are you really even a meat-eating human? Otherwise, I better get an invite. 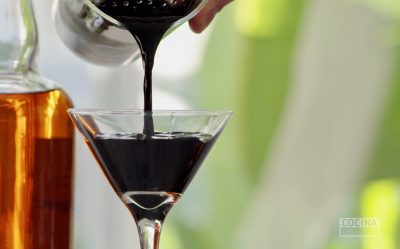 Looking for a great homemade chicken soup recipe that you can make from scratch? Look no more: this Chicken Soup with Tomatillo and Avocado brings all the feel-good sensations of the classic chicken soup and is full of Latin flavors.

Not your Abuelita’s Apple Cider

No disrespect to Abuelita, but this cocktail recipe will make you switch from her traditional recipe to ours!